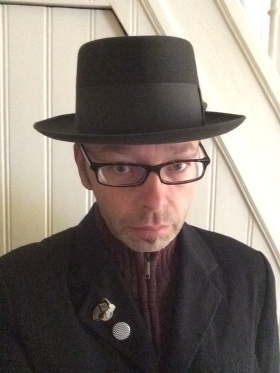 When you’re living in the life-line…

1989 to 2015 Solo project Brunnen. 1995 live debut in France. Kinkelaar releases 8 albums as Brunnen. The final album as Brunnen is released in 2015. He records solo music under several pseudonyms as well as his own name.

1989 and 1991 Performs live with American noise/performance artists The Haters.

1992 Apprenticeship with Paul Panhuysen from The Apollohuis in Eindhoven, produces several albums released on Apollohuis Records.

1994 onwards Forms conceptual fan club for the works of Catalan artist Jordi Valls. The fan club is still active and Kinkelaar is still its only member.

2004 Writes liner notes for CD-release ‘Here I am’ by Linda Thorson.

2010 Provides vocals on Nurse With Wound album The Memory Surface.

2015 Release of Korla, a documentary film about Korla Pandit. Kinkelaar is featured in the film and runs Pandit’s official website.

From 2015 onwards, Kinkelaar records solo material under his own name.

2016 Contributes the track Golden Dawn to the Legendary Pink Dots-tribute album Escape – A Collection Of Songs Straight Out Of The Asylum.

2018 Contributes the track Boy In Love to the Residents album I Am A Resident.

2019 Release of The Garden Of Perpetual Dreams album, reworking 30-year old tapes into a new album.

2020 Release of Winter, a ‘new’ Beequeen album featuring recordings from 1988 to 2020. Writes liner notes for 4CD box set release of ‘The Safari years’ by Wayne County and The Electric Chairs.